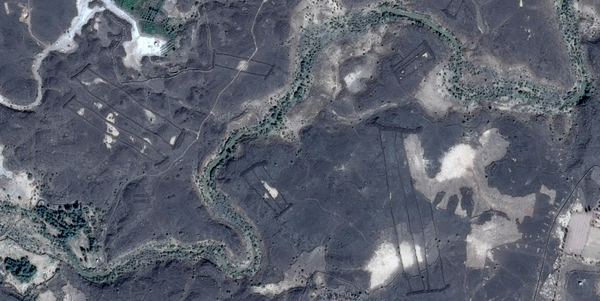 Using Google Earth, an archaeologist has identified nearly 400 stone structures called “gates” in Saudi Arabia. They may have been built by ancient nomadic tribes.
CreditSatellite photo by CNES/Airbus, via Google Earth
By Nicholas St. Fleur
Google Earth has unlocked the gates to ancient mysteries around the world.

For years, amateur and professional archaeologists have used the search engine’s satellite imagery to discover mysterious earthworks in Kazakhstan, Roman ruins, a forgotten fortress in Afghanistan and more. In the past decade, Google Earth also has helped identify thousands of burial sites and other “works of the old men,” as they’re called, scattered across Saudi Arabia.
Now, archaeologists have uncovered nearly 400 previously undocumented stone structures they call “gates” in the Arabian desert that they believe may have been built by nomadic tribes thousands of years ago.
“We tend to think of Saudi Arabia as desert, but in practice there’s a huge archaeological treasure trove out there and it needs to be identified and mapped,” said David Kennedy, an archaeologist at the University of Western Australia and author of a paper set to appear in the November issue of the journal Arabian Archaeology and Epigraphy.
“You can’t see them very well from the ground level, but once you get up a few hundred feet, or with a satellite even higher, they stand out beautifully.”
Since 1997, Dr. Kennedy has flown planes and helicopters over Saudi Arabia’s neighbor Jordan, photographing the angular and wheel-like structures scattered over its lava field or harrat. Not much is known about the people who built the edifices, but they are thought to have constructed them at least 2,000 years ago and maybe as far back as 9,000 years ago, according to Dr. Kennedy. They are believed to be the ancestors of the modern-day Bedouin people in the region. 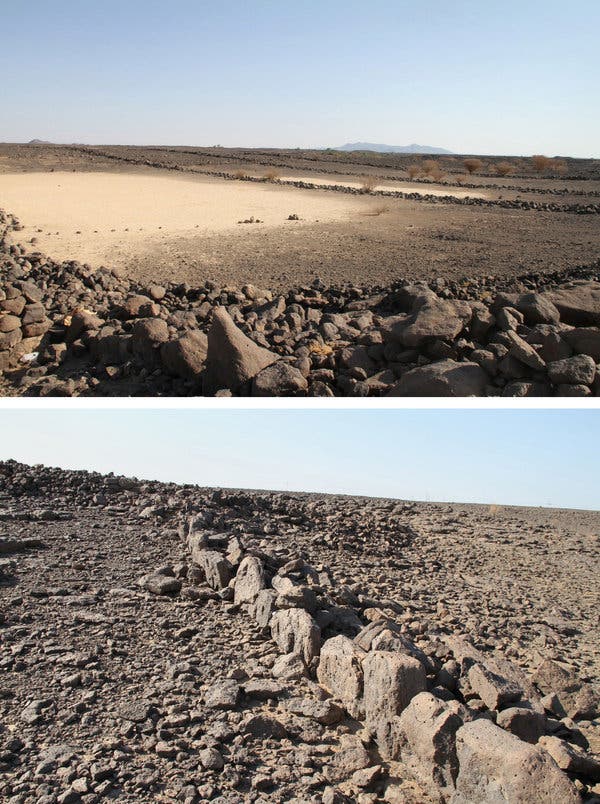 Ground views of Samhah Gate 31. Scientists are not sure what purpose these structures served.
CreditGrant Scroggie
The most well-known of the basalt boulder structures are the “kites,” which were first identified by air pilots in the 1920s. Each looks like a child’s kite, complete with strings and long fluttering tails that are two-dimensionally flattened into the ground.
Archaeologists think ancient nomadic tribes used the kites, which can be more than a mile long, for hunting. The structure’s two long converging walls would funnel stampedes of gazelles into the body of the kite, where they would be slaughtered.
But the lava fields extend beyond Jordan’s borders into countries like Syria and Saudi Arabia. So do their mysteries. Saudi Arabia in particular offers a wealth of harrats that are just out of Dr. Kennedy’s reach.
“We would have loved to fly across into Saudi Arabia to take images. But you never get the permission,” he said. “And then along comes Google Earth.”
In 2004, Dr. Abdullah Al-Saeed, a neurologist and founder of the Desert Team, a group of amateur archaeologists in Saudi Arabia, explored the bleak lava field known as Harrat Khaybar. He saw walls of stones stacked about three feet high, but said that he did not appreciate their unique design at that time.
Then in 2008 he returned to the same spot from his desktop computer.
“When I saw the updated images of Harrat Khaybar from Google Earth, I was literally stunned and could not sleep that night,” Dr. Al-Saeed said in an email. “Flying like a bird all over the Harrat from one enigmatic structure to another! How come we passed by these structures without appreciating their design?”
He spoke to his colleagues, and they set out to investigate the most striking structure they saw in person. The Harrat Khaybar was more than 550 miles from Riyadh, the capital of Saudi Arabia. So they took a plane to a nearby city, rented a car and set out for the volcanic domes. In order to navigate the rocky terrain, they had to do much of their exploration on foot through the lava field.
“The question we always discuss while investigating them is, why here? Why in this stony, frightful, rugged land?” he said. He snapped several photos and sent them along with the Google images to archaeologists like Dr. Kennedy for feedback.
“Absolute bafflement.” That’s what Dr. Kennedy said he felt when he first saw the satellite images. Suddenly, he was confronted with structures quite different from anything he had ever seen before. He called them gates because when looked at horizontally, they resemble a simple fence with two thick upright posts on the sides connected by one or more long bars.
“They don’t look like funerary, for disposing of dead bodies. They don’t look like structures where people lived, and they don’t look like animal traps,” he said. “I don’t know what they are.”
fonte: https://www.nytimes.com/2017/10/19/science/saudi-arabia-gates-google-earth.html?mwrsm=LinkedIn 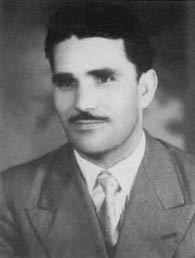